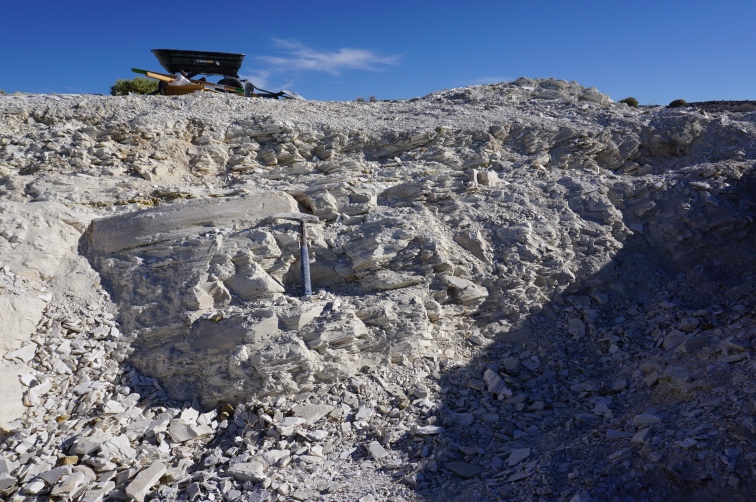 Background and Ongoing Work: A diatomite mine in Fernley Nevada hosts a fossil threespine stickleback lineage (Gasterosteus doryssus) that is is probably one of the best examples of gradual Darwinian evolution in the fossil record. Stickleback were fossilized in annual varves and this deposit spans more than 100,000 years. I am collaborating with Dr. Michael A. Bell, who developed this system (e.g., Bell 1985; Bell et al. 2006; Hunt et al. 2008; Bell 2009) to analyze existing data to infer the genetic basis of armor loss, detect the accumulation of reproductive isolation, understand how sexual dimorphism evolves, and test Fisher’s fundamental theorem. I was also awarded an NSF CAREER award in January 2022 to revisit and further prepare >4500 specimens in the University of California Museum of Paleontology to gather a massively multivariate trait set conducive to questions of microevolutionary rates, evolution of allometry and the P-matrix, and more. I will be hiring a fossil preparator (preferably as a PostDoc) in Spring 2022 to begin work in late Summer 2022. Know anyone? Project Summary

Resurrection Ecology and the Evolutionary Effects of Radiation on Populations

Background and ongoing work. Between 1953 and 1962, the US Department of Energy denotated 100 above ground nuclear weapons as part of a testing program at the Nevada Test Site. Radioactive fallout from these tests covered the globe but was particularly heavy in Utah, Nevada, and Arizona. In new work recently funded by a National Science Foundation EAGER grant, Co-PI Matt Walsh, Cole Thompson, and I are asking about the evolutionary impact of this fallout. In June 2020, we visited 8 alpine lakes in Utah to take sediment cores, with the hopes of reaching sediments that were deposited before, during, and after testing. Next, we will isolate the dormant eggs of the small crustacean Daphnia from those sediments. By hatching those eggs and keeping track of hatch rate, survival, and reproduction, we should be able to measure the fitness effects of radiation on the populations, and how they have evolved in response.

Background and Findings: Convergence onto similar phenotypes in similar environments by independent species or populations is strong evidence for evolution by natural selection. Often, evolutionary ecologists focus on those traits that are evolving most in parallel. Multi-trait, quantitative approaches to parallel evolution that ask how much parallelism there is, and why, are more rare. In collaboration with Dan Bolnick, Catherine Peichel and Andrew Hendry, I have studied populations of threespine stickleback adapting to lake and stream environments replicated across 16 different watersheds on Vancouver Island, BC, Canada. We found that the extent of parallel evolution depended strongly on which trait was being investigated. Deviations from parallel evolution of lake-stream divergence, and depended on watershed specific differences in environment and lake-stream gene flow. This suggests that evolution is not parallel, but can still be predictable if we know enough about the system.

Ongoing Work: Dan Bolnick, Catherine Peichel, and I are currently experimentally investigating (non)parallelism in natural selection, to see if that helps explain non-parallel evolution in morphology. We’re at the ‘lots-of-sequence-data’ stage, and working slowly through the bioinformatics portion of the analysis. Currently, I am collaborating with Marius Roesti, Dan, and Catherine to investigate habitat choice and its genetic basis in lake and stream fish.

Background and Findings: Stuart’s graduate work tested whether and how the native lizard Anolis carolinensis is responding evolutionarily to the recent invasion of A. sagrei to small spoil islands in Mosquito Lagoon, Florida. Anolis carolinensis naturally occurs on every island in the lagoon. A. sagrei has reached nearly every island. Stuart compared A. carolinensis perch height and toepad morphology on five islands where A. carolinensis was the only anole (the controls) to six islands where A. sagrei had invaded sometime since 1995 (the treatments). Anolis carolinensis perched higher in the presence of A. sagrei and also had larger toepads with more clingy lamellae. This is consistent with toepad morphology across myriad arboreal anole species. A common garden experiment suggests that these toepad differences are evolved. Stuart et al. also also ruled out alternative explanations like chance or environmental differences among treatments.

Ongoing work: With colleagues Ambika Kamath, Nick Herrmann, and Kiyoko Gotanda, we re-started this work in 2019, after finding that one of the five control islands had been invaded by A. sagrei sometime between 2011 and 2018. That paper is published. I’m also working with Douglas Crawford and Marjorie Oleksiak from University of Miami on a genomic analysis of character displacement in this system–stay tuned.